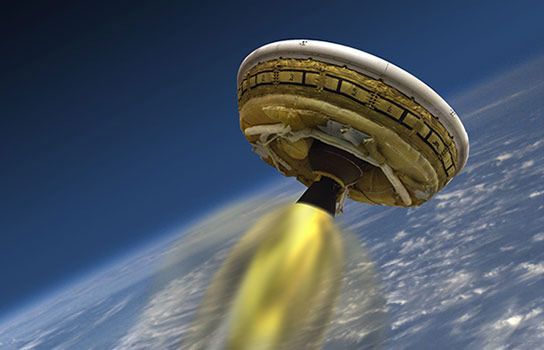 Mushroom Networks technology help NASA in their 2nd test for the Low-Density Supersonic Decelerator (LDSD), designed for landing missions on Mars. Mushroom's WAN orchestration technology is being used daily by many brand-name organizations around the world, however, our team was especially proud to be part of a NASA project.

During Monday June 8th, 2015, NASA tested the Low-Density Supersonic Decelerator (LDSD), designed for landing missions on Mars. This was the 2nd of the three tests that will be conducted by NASA. The lift of the saucer-shaped test vehicle to an altitude of 120,000 feet was streamed live via Mushroom Networks’ Streamer solution and here is the recording of the live feed.

For tracking the balloon and test vehicle from the ground, a special camera that can zoom and stabilize at long distances was used. At its peak the vehicle reached an altitude of 120,000 feet off the launching pad and a speed of four times the speed of sound. The video from the ridge in Hawaii was sent over Mushroom Networks’ Streamer 4000, which was utilizing AT&T and Verizon cellular 3G/4G data cards. The way Streamer 4000 works is by Broadband Bonding, i.e. it aggregates together those several cellular data cards into a single Internet connection and also optimizes the Internet connection for live video streaming. This provides an extremely reliable yet cost-effective method of streaming live video from challenging locations such as the ridge in Hawaii.

Because of this test done by LDSD, the human race is one more step closer to exploring Mars. Congratulations to LDSD and NASA! The Mushroom Networks team is proud to be a part of this project.

Mushroom Networks is the provider of SD-WAN (Software Defined WAN) and NFV solutions capable of Broadband Bonding that enables self-healing WAN networks that route around network problems such as latency, jitter and packet loss.